Bring your game to a whole new level with AC Storm Soccer Academy!

AC Storm is dedicated to the development of all levels of youth soccer in the West Michigan area. Our training philosophy focuses on numerous touches on the ball, repetition, confidence, "mastering the ball", technique, shooting and finishing. We apply drills learned from the Meulensteen Academy, used at Manchester United. Our experience, commitment, and passion for the game combine to make every player's training experience fun and productive.

AC Storm is proud to announce that we are offering a Spring Break Camp this year! The primary focus for the week will be footskills and shooting/goal scoring. The details are as follows:

AC Storm is proud to announce that we have formed a partnership with EFP Fitness effective August 2018. The overall purpose of this partnership is to provide our athletes with exceptional fitness training in order to reach the next level. We are excited to announce camp dates soon!

Congratulations to Grand Rapids Catholic Central Girls Soccer for winning regionals in a hard fought win over Unity Christian! The girls trained during the off season with our Technical Director Jamie Fuller and had a very successful season reaching the MHSAA Semi Finals. We look forward to a continued successful partnership!

Everyone at AC Storm would like to wish Eli Leegwater a congratulations for being picked for the ODP Region II Team. Eli has worked very hard and fully deserves this honor. We wish Eli all the best in the future! 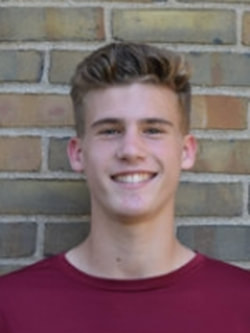 AC Storm Soccer Academy is proud to announce that one of our athletes, Eric Conerty, has signed with Butler University on a 4 year scholarship. In addition to playing for Butler, Eric will also train with the first team at MLS club Columbus Crew. This is a fantastic opportunity for Eric and we are excited for him to test himself against the very best. Eric is a member of our class of 2018 and has participated in our summer camps and individual training since 8th grade and is a current player for the Michigan Wolves Academy in Detroit. We wish Eric the best of the luck in his future endeavors!

Congratulations to AC Storm athlete Torrence Kuhn for being selected for the 2006 Michigan ODP Academy! Torrey has been with AC Storm for nearly 2 years and we are very excited that his progress is being rewarded at the highest level. As an attacking player with excellent technical ability and footskills we are confident that Torrey will continue to excel in the future. Congratulations Torrey!

Congratulations to AC Storm's Lucas Rosendall for being selected for the final pool for the Michigan Olympic Development Program! He will now compete in the Region II training program which covers the Midwestern United States. Lucas has worked very hard throughout his career and fully deserves this achievement. Great job Lucas!

Congratulations to AC Storm athletes, MJ and Ally Francisco, on achieving success in the Michigan Olympic Development Program! MJ has made it into the top 23 pool of players in Michigan as a left fullback. He will continue to compete and look to earn a spot in the final 16 pool for the 2000 age group. Ally has made it into the final 16 pool for the 2002 age group in Michigan and she will compete in a developmental camp at Grand Valley State University as a result of her achievement. Both of these players have worked hard over the winter and we look forward to having them join us for the 3rd session of our winter academy! 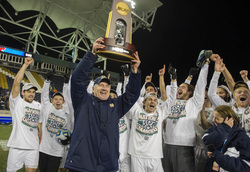 AC Storm congratulates Notre Dame Men's Coach Bobby Clark and his team on winning the NCAA Division 1 National Championship! Bobby and his boys worked very hard throughout the season and thoroughly deserve this achievement. We are proud to have Bobby Clark as a training partner with AC Storm and look forward to once again benefiting from his experience and guidance during our High School Preparation Camp 2014!

Everyone at AC Storm congratulates Peter Brown on his commitment to the University of Michigan! Peter's dedication to continually improving his game has led him to what is a fantastic opportunity to play soccer in college and earn an education. All the best for a successful college career Peter!
Testimonials

"I really enjoyed working with Jamie, Jim and David at the high school preparation camp. I was impressed by the players' enthusiasm and their attitude was fantastic! They were well coached during the week and learned a lot in order to prepare them for their high school season."

"I have been attending AC Storm camps for four years and I can't express enough how much they have helped improve me as a soccer player. Over long breaks in the winter and when I hadn't been playing soccer as much and my touch was starting to get rusty, I went to AC Storm camps. I would come back to my team the next season miles ahead of where I would have been had I not attended the camp. AC Storm works to improve all aspects of your game; including refining touch, passing and shooting skills. The camps run smoothly and the coaches make sure you make the most out of every minute. The drills are also small-sided, allowing you to find new ways to practice by yourself. If you want to reach your maximum potential as a soccer player, I would definitely recommend AC Storm."


My son has had the opportunity to work with Jamie Fuller for just under a year. Jamie's passion and commitment for coaching is so apparent when he is working with my son. His training techniques are very diverse and helped my sons footwork skills and development immensely.  My son is quicker, stronger and has dramatically increased his understanding of his position on the field and the game. Jamie has an excellent understanding of what it takes to get to the next level. This next year my son will move up to the Gold team and I credit it to the one on one training sessions my son has had with Jamie. While my son is expected to work hard and to push himself when he trains, he has a lot of fun and are excited about each training session. I enthusiastically recommend Jamie to anyone who is considering soccer training for their child.


"I attended the AC Storm Soccer Camp run by Mr. Fuller and his sons Jamie and David Fuller. This camp was intensive. The camp enhanced my soccer skills. The camp was made for kids who wants to play college soccer. I highly recommend it for high school and middle school kids. In this camp they will push you hard to do your best, so you can advance in soccer. If you are planning on going far in soccer you should definitely do this camp."


"The AC Storm high school soccer camp was fantastic. My son had a great time because it was so much fun. I liked it because it was the perfect combination of technical training and soccer conditioning as the players were constantly touching the ball for hours. Jamie Fuller's  passion and knowledge of the game and his unique ability to demonstrate soccer skills is quite impressive for a young trainer. Over the years my three sons have attended many collegiate soccer camps at costs of $500 to $700. The AC Storm camp even had a big time collegiate coach train the players on the last day. Bobby Clark ( men's head soccer coach at Notre Dame) shared his incredible coaching talents both on and off the field. All this for a fraction of the cost of  most college soccer camps. The AC Storm is back! We will be back too!" 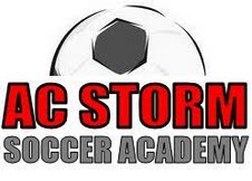